The Single Chain Technique in Action

After a few years of developing and practicing Reintegration techniques, I shared them via email with one of my friends who needed some help but didn’t have money for any qualified assistance at that time. For our purposes, we will call him Dario. He had a problem with the repetitive appearance of a person (actually a different person in different periods) who was causing him trouble, pressing or even harassing him in some way. The person would usually bully, threaten and ridicule him in high school, after that at university and, when he graduated, also at work. Whenever one such person disappeared, another would appear very soon, acting similarly to the previous one. It seemed to him that it was a never-ending circle.

Dario was not in a position to ask for assistance from a trained instructor, so he decided to deal with this problem alone, at home. In his letter, he described the process which was extremely successful in the end.

“…I became acutely aware of this problem fairly recently, a year ago, although the very problem had existed for almost fifteen years. I dealt with it using many techniques, but to no avail.

When I finished reading your working material, I assumed that the Single Chain technique would be the best option for me, especially due to limitations in my closest environment—I have a job with many commitments and a family with really demanding children (and wife :-) ). I succeeded in isolating myself from all of this for a half an hour, did the SC procedure and the result was astonishing to me—the Harasser has never, never again returned to my life! I know that the problem has been definitely solved because I feel it. It’s such a relief!

It was a very emotional and even dramatic process. I relaxed and recalled a few pretty traumatic characteristic situations in which one of the harassers was involved. I asked myself: “How would the Harasser in my life generally be represented? How would he look and what would be his characteristics?”

I got the picture of a demon in front of me. It (or he) was pretty scary! The red-blackish being with long ears and horns was ominously staring at me. 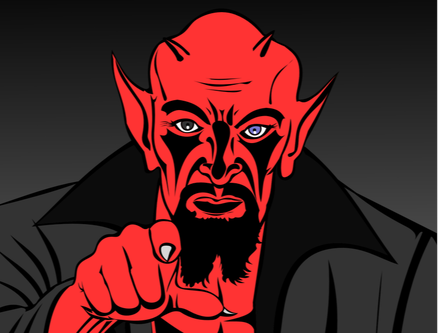 At that moment, I decided to just communicate with him, feeling that I wouldn’t be brave enough to identify every time with that being and do the DTI for each goal. I greeted him with respect which didn’t please him, though.

After asking the question of what was his goal he answered very clearly:
It was a harsh answer, but I wasn’t surprised since I knew that it’s very common to get really menacing or offending responses at the beginning of the process. I thanked him and informed him that his goal had been fulfilled. I even imagined blood in my mind and felt that he had his revenge for everything. Then I continued calmly with the next question, seeking for his higher goal. It was immediate and striking:
Emotions were flooding me. Some pictures had appeared in my mind with my not-so-good behavior to others. Maybe that influenced the next answer:
I felt that. Maybe for the first time, I deeply regretted some things I’d done that I never thought I should regret for. Then it continued with sobering responses to my continued questions.
I was stunned. I would always remember this statement. I had never forgiven some people before and here was the result, in front of me. Still staring at me, although somehow softer now. Then he continued with unforgettable advice, after each question.
In front of my “inner eyes,” the creature transformed into a beautiful white angel with wings!

​
I was completely overwhelmed by energy; my body was engulfed by shimmering light. A wonderful, astonishing experience. Eventually, I continued to ask questions to this transformed being.
He wants the best possible ending for me…
… And he wants the same outcome for himself as well.
This was the end of the process, without any doubt. Nothing was left except deep, blissful peace. 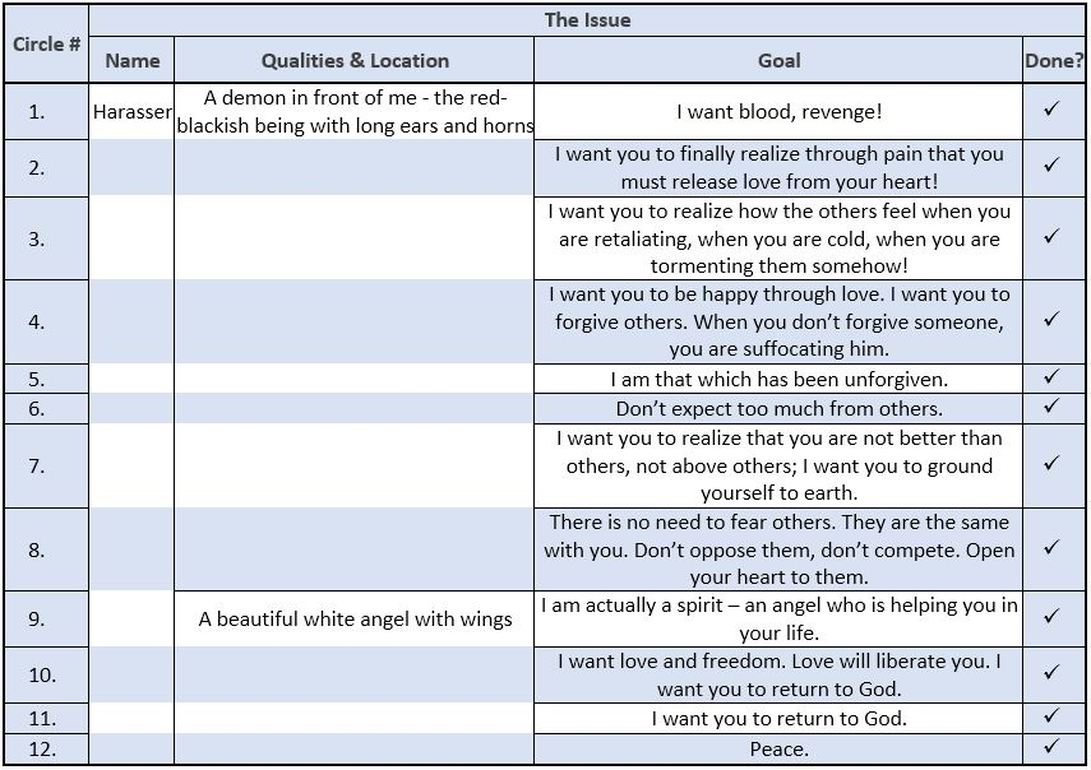 Since then, my life has really changed. Not only have I never again met any person with that role of harasser toward me, but I also have learned so many things in this unforgettable interaction with that angel. Of course, there are still people or situations in my life that seem to me unpleasant in some way, but I look at them completely differently—they are my best teachers, they are always precisely pointing at me as the source of every unpleasant (and pleasant) experience. Now I definitely know that I am the creator of my own reality!

I keep using these techniques at home. The processes conducted after this one were, more or less, softer, lighter, and even faster. Maybe because I now often use the complete IT procedure, always with DTI basic technique which relieves a lot of emotional charge immediately. Maybe the new layers of my personality now are not so acute and charged with emotions, so it’s becoming easier and easier. I don’t know. But surely this first process was a kind of real breakthrough. (…)” 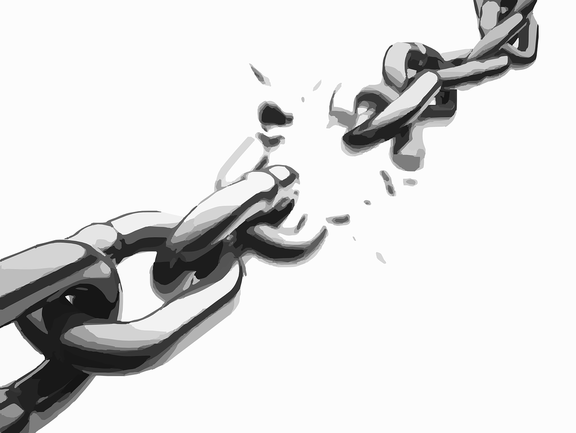