​“What you react to in others, you strengthen in yourself.” ― Eckhart Tolle
“Not forgiving is like drinking rat poison and then waiting for the rat to die.” ― Anne Lamott, Traveling Mercies: Some Thoughts on Faith

When we are repetitively accused of doing some bad thing, especially in childhood and adolescence, it leads us to a strong underlying sense of guilt and resentment. Furthermore, it causes us to developing anger and aggression.

A sense of guilt is one of the strongest obstacles to a healthy lifestyle. It is a self-destructive emotion, very dangerous to our health and life in general. Regardless of if the feeling is justified or not, by feeling guilt we assume that we were badly wrong about something and that we have to be punished. That’s a dangerous thought. Whether conscious or subconscious, this emotion attracts such circumstances in which we are punished in some way.

Resentment is also a perilous emotion that works in the background of our personality, for long periods, which spoils our health and our relationships with people. It can undermine our ability to achieve goals and live a successful life in general.

We must deal with our resentment toward other people and guilt related to our own deeds. Otherwise, these feelings will continually undermine our lives.

Put on paper all the names of people that you have had a continuous relationship with. You should examine for what concretely you criticize each person, either openly or covertly. Also, try to find any feeling of your own guilt toward these people, if you think that you did something wrong to them. It could be in a form of list, consisting of their names, accusations toward them and your guilt related to them. This list could encompass not only names of people, but general terms, like life, society, job, etc.

One of my friends was also working on this subject and part of his list was this: 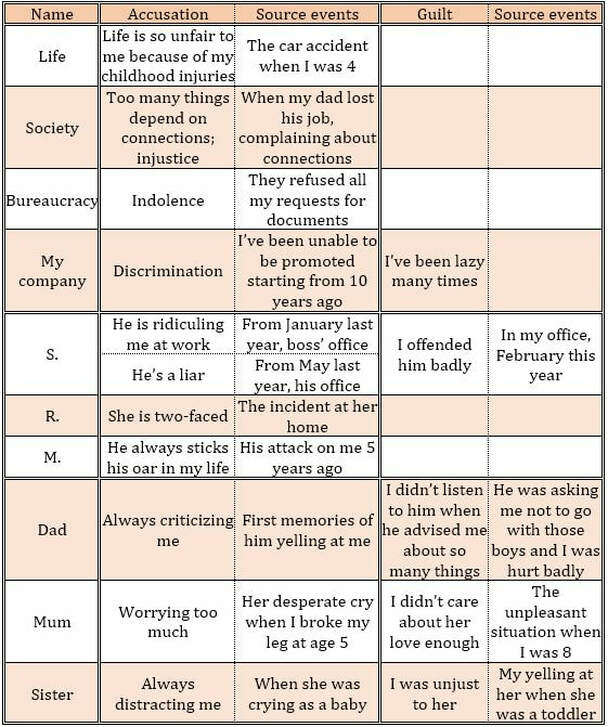 List of Accusations and Guilt (example)
​Note that some of these accusations are actually beliefs or could also be other aspects of personality, covered in other sections.

In order to find concrete circumstances from the past that are a source of guilt and resentment, it is advisable to use the timeline method.

Then we are ready for the next step: forgiveness. Forgive truly and wholeheartedly both those you are accusing and yourself.

“All negativity is caused by an accumulation of psychological time and denial of the present. Unease, anxiety, tension, stress, worry—all forms of fear—are caused by too much future, and not enough presence. Guilt, regret, resentment, grievances, sadness, bitterness, and all forms of non-forgiveness are caused by too much past, and not enough presence,” said Eckhart Tolle in his book The Power of Now.

Of course, forgiving is sometimes difficult to do. Our Heart has been closed in a cocoon, enveloped in many layers of elements of our persona, especially accusations and guilt. We have just started releasing it from that prison. We sometimes feel we just can’t do that in some situations, to some people that we hurt, or that we can’t forgive ourselves.

What to do in that case? Do the DTI+ on each hurtful memory. Let the MH part be: “I forgive (the person’s name) completely, with all my Heart.” Do this procedure several times, if needed. Remember that every person is only doing the things they believe to be helpful for their own satisfaction or happiness. They don’t know better. If their deeds were harmful, even apparently deliberate toward you, it was still without true knowledge. They were just taught by miserable circumstances or ignorant people that those kinds of deeds were helpful to gain some satisfaction… just as you were. You have to forgive them! The same goes for you; forgive yourself, too!

​If even this doesn’t help, don’t give up. You must release yourself from the cage of resentment and guilt. Otherwise, you can’t break free and can’t continue growing. The final solution is to deal with these memories or sources of resentment with the Inner Triangle technique. Or use any other spiritual or psychological technique that you know of to be helpful and effective. The urgent goal is to release all resentment, both toward yourself and others.
Reintegration System